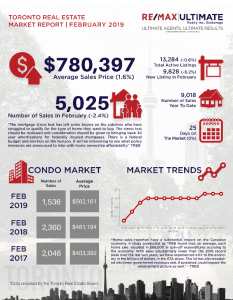 Toronto Real Estate Board President Gurcharan (Garry) Bhaura announced that Greater Toronto Area REALTORS® reported 5,025 homes sold through TREB’s MLS® System in February 2019. This sales total was down by 2.4% on a year over-year basis. Sales were also down compared to January 2019 following preliminary seasonal adjustment. “The OSFI mandated mortgage stress test has left some buyers on the sidelines who have struggled to qualify for the type of home they want to buy. The stress test should be reviewed and consideration should be given to bringing back 30 year amortizations for federally insured mortgages. There is a federal budget and election on the horizon. It will be interesting to see what policy measures are announced to help […]

Land Transfer Tax rebate (Toronto): In the City of Toronto, if you are a first-time purchaser of a newly constructed or re-sale residential property, for conveyances and dispositions of an eligible home there is an available rebate of up to $4,475. When you buy land or an interest in land in Ontario, Land Transfer Tax is paid. First-time homebuyers of an eligible home may be entitled to a refund of all or part of the tax. The maximum amount of the refund is $4,000. Home Buyer’s Plan (HBP): This program allows a withdrawal of up to $25,000 tax-free from your registered retirement savings plans (RRSP) to put towards the purchase of your home. With this plan you are essentially lending yourself money from your RRSP. It […] 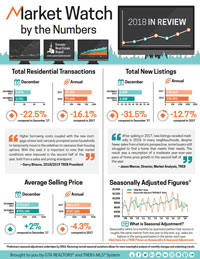 Toronto Real Estate Board President Garry Bhaura announced that Greater Toronto Area REALTORS® reported a total of 77,426 residential transactions through TREB’s MLS® System in 2018. This result represented a 16.1% decline compared to 92,263 sales reported in 2017. Total new listings entered into TREB’s MLS® System were down by 12.7% over the same period to 155,823. The overall average selling price for 2018 transactions, at $787,300, was down by 4.3% year-over-year for all home types combined across the TREB market area. Home prices were up very slightly in the City of Toronto and down in the surrounding GTA regions. This dichotomy reflects the fact that the condominium apartment segment, which accounted for a large proportion of sales in the […]

Toronto Real Estate Board President Garry Bhaura announced that Greater Toronto Area REALTORS® reported 7,187 residential sales through TREB’s MLS® System in March 2019. This result was inline with 7,188 sales reported in March 2018. For the first quarter of 2019, sales were down by 1% compared to Q1 2018. The MLS® Home Price Index Composite Benchmark was up by 2.6% year-over-year in March, while the average price for March sales was up by a lesser annual rate of 0.5 % to $788,335. The average selling price for Q1 2019 was up by 1.1% year-over-year.